English
Blog Detail
Home » Blog » Products News » The History of Medals: How did the Medal Come to the Present？

The History of Medals: How did the Medal Come to the Present？

Honor makes art flourish, and everyone who is interested in delving into it is not excited by the sense of honor.

Medals make things that are common and familiar in our daily lives, but do you really understand the medals? Its history has been around for a long time. Below I will introduce the history of medals to you in different periods.

1. Medals in the fourth century BC

The first known example of the medal in history came from the historian Josephus, who wrote long after the incident, in the fourth century BC, Alexander the Great used the decoration as the high priest Jonathan to lead the Hebrews to help the return of Alexander the Great. The Roman emperor used the military medal as a political gift. At that time, the decoration were very similar to very large coins, usually gold or silver coins. These and gold coins are used as jewellery worn by both sexes.

2. Medals in "dark age" or immigration period in Northern Europe

The bracteate is a type of thin gold medal, usually flat on the back, found in the so-called "dark age" or immigration period in Northern Europe. They usually have a suspension loop and are worn as a jewel on the chain. They have long imitated the coins and decoration of the Roman Empire, but there are gods, animals or other designed heads.

3. Medals in the late Middle Ages

In Europe, from the late Middle Ages, sovereigns, nobles and later intellectuals simply presented award to their political allies to maintain or gain the support of influential people, which was common at the time. Awards are made of various metals, such as gold, silver plated, silver, copper and lead, depending on the state of the recipient. They are usually about three inches wide and the medal face is the donor's head, surrounded by an inscription with their name and title, and their back logo, with the motto engraved on the edge. These awards are usually not intended to be worn, but they may be set as pendants on the chain. Beginning in the 16th century, in order to commemorate specific events, including military battles and victories, awards for private companies that could be sold were made, adding to the practice of issuing military medals to combatants, although initially a few senior officials.

4. Medals in the Renaissance

The revival of the Middle Ages seemed to have begun around 1400, when the luxurious French prince Jean Duc de Berry commissioned many large classic awards, which may be rare or a unique case. Only bronze castings from precious metal originals survive, although it is well known that at least some of the awards are also set with jewels and are likely to be worn on the chain. The association between awards and the classical revival began to take a rather different form, and the exchange of awards became associated with Renaissance Humanism. In Renaissance princes would send humanist writers and scholars awards in recognition of their work, and the humanists began to make their own awards, normally in bronze, to send to their patrons and peers. By the 16th century, awards were increasingly produced by rulers or cities for propaganda purposes. In 1550, a die-stamping machine, using steel dies, was introduced in Augsburg, Germany, and soon this process became standard. The artist now cut an intaglio die rather than modelling in relief.

5. Medal after the 17th century

By the late 17th century, most parts of Western Europe could produce fine work. Some awards were also collected, which continues to the present day. 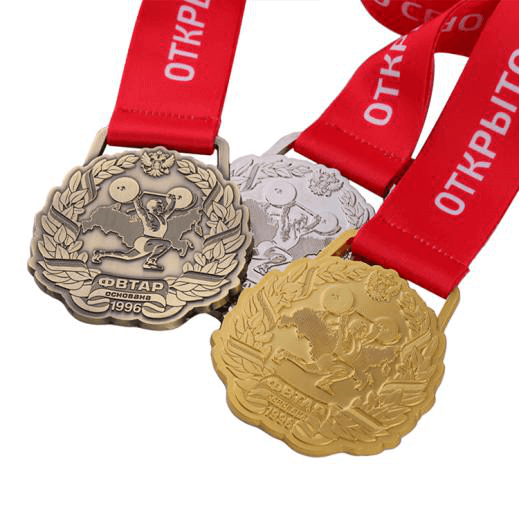