English
Blog Detail
Home » Blog » Products News » What are sports medals made of?

What are sports medals made of?

Nowdays, gold, silver and bronze medals are used to award winners in Olympics, Asian Games and individual world championships. However, the winner of the sports competition had received a circle woven with olive trees or laurel branches, named the "laurel crown" as a prize for a long time. In 1465, at a fun fair held in Zurich, Switzerland, he won a gold coin for the winner of the "triple jump".

This can be said that it was not given the "laurel crown" for the first time. The winner of the 1st Olympic Games in 1896 received such a "laurel". It was not until 1907 that the International Olympic Committee officially issued the resolutions for the Olympic gold medalists, silver medals and bronze medals at the Executive Committee held in The Hague, the Netherlands, and implemented it at the 4th London Olympic Games held in the following year, since 1924. Since the 8th Paris Olympic Games, the International Olympic Committee has made the following additional decision: In addition to awarding decorations, the winners also issued certificates (certificates) and made specific designs and productions of gold, silver and bronze medals. Provisions.

The Olympic Charter stipulates that the decorations of the first, second and third prizes are not less than 60 mm in diameter and 3 mm in thickness. Among them, the first prize (gold medal) and the second prize (silver medal) decorations are made of silver, the purity (including silver) is not less than 92.5%, and the surface of the first prize award (gold medal) is plated with at least 6 grams of pure gold. These regulations have been in use since the 9th Amsterdam Olympics in 1928.

The first Olympic medal in 1896 was designed by the French sculptor Jules-ClémentChaplain. The award is on the front of the Greek goddess Nike and the opposite is the Acropolis. They were made by the Paris Mint because Paris hosted the 1900 Olympics. This also opened the tradition of creating Olympic medals in the host city. For the next few Olympic Games, the medals are designed by the host city. Until 1912, the gold medals were all made of pure gold.

A feature of the new decoration change is that the words appearing on the medals are in Greek to indicate respect for the origin of the ancient Olympic Games and the re-sound of the modern Olympics. The International Olympic Committee has decided that the medallions will be displayed in Greek no matter where the Olympic Games will be held in the future.

In the front of the new medal, the goddess of victory with a pair of huge wings is above the stadium. This is completely different from the image of the statue of Victory in the past medal pattern, which is more energetic and more in line with the spirit of the Olympic Games. The medal is engraved with the "28th Olympic Games in Athens 2004" and the name of the project where the winners participate. Above the head of the goddess of victory, there is the symbol of the Olympic rings.

The back of the new medallion consists of three parts: the first is the burning Olympic flame, the second is the lyrics of the "Olympic song" on the sacred fire, and the third is the sign of the Athens Olympics above. 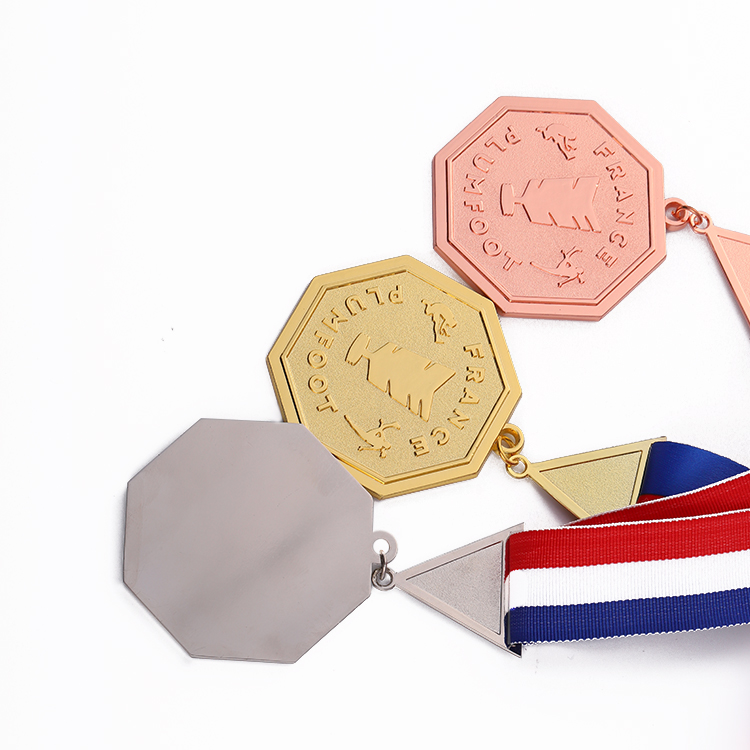